When my brother phoned and told me

that he was going for a run,

I never thought one moment,

it would be under the starter’s gun.

He said he’d do a marathon,

(to me an age old Snickers).

But no, it was the runny-kind.

I couldn’t help but snigger.

It reminded me of the time he called

then laughed some more at him.

He took it well, whilst still in shock,

and carried on his life.

Preparing for the inevitable:

I got a call, to babysit my Ayla.

I didn’t ask. I grabbed my keys

I was there, in half an hour.

It didn’t matter that the duck I’d bought,

was cooking in the pot.

Or the plum sauce to accompany it,

was left aside to rot.

(no really, don’t mention it.)

So that’s when unlucky Selma,

was diagnosed with palsy.

But the docs had checked her baby bump

and said that all was rosy.

A few weeks on, the twins arrived.

The emotions began to flood.

The girls were made to stay on ward

with complications of their blood.

But Sel still wears the scar of this;

she has done for a while.

Whilst happy on the inside,

she finds it hard to smile.

So that’s what made my brother

put on his running shoes,

and beg you all for money

until his face turned blue.

(he’d aimed for only half.)

relaxing in the bath.

Are you signed up for next year’s?

To those that gave some hard earned dosh

Thank you, good work and cheers! 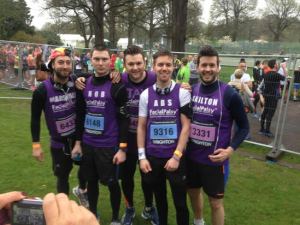 Congratulations, Andrew, you’ve done yourself, your family and the Facial Palsy charity, proud. If anyone reads this and still wants to donate then please, you can do so here.

One thought on “Running Man”