Now let me start this by saying I’m not (usually?) a chap that seeks attention. You’re more likely to find me looking at a clock at the work Christmas party over ordering up a line of Flaming Sambucas for everyone before donning an afro wig and dancing the conga in a mankini. Yet here I am, wearing some hipster reading glasses I probably don’t honestly need and shouting “Look at this!”

So back in September I wrote a tweet calling out the genius account that someone at KFC’s marketing department had set up. Corporate accounts are ten a penny but what made this interesting was the “11 herbs and spices” that KFC followed. That was it. Nobody else.

I took some screenshots, wrote the tweet, patted myself on the back at how clever I was for noticing this, and posted. I got a few likes, a couple of retweets. My phone buzzed a few times during the day. I felt rather pleased with myself. 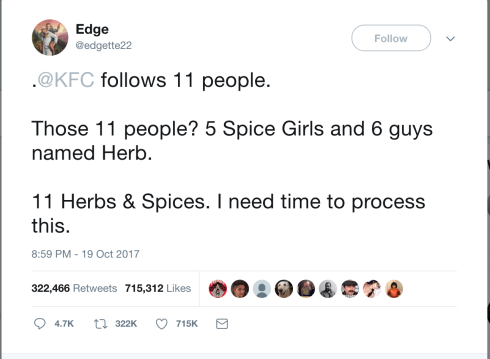 But then yesterday I was pointed in the direction of a new revelation. KFC have rewarded the “original finder” with vouchers for chicken for a year and a really weird painting of the guy riding the colonel like a space hopper. 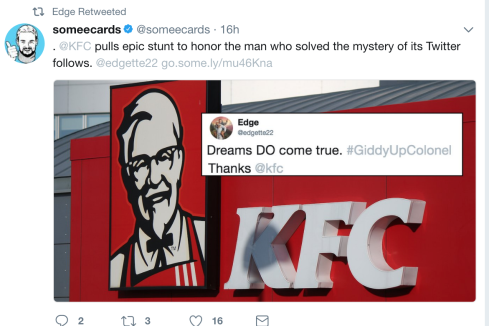 Now I’m not suggesting for one moment that I am the person to have made the discovery but I sure as heck beat the guy that went viral, was awarded with 52 succulent breasts, and (according to recent allegations) works for the PR company connected with the finger-licking brand. Oh.

So come on KFC, where’s me greasy golden bucket of congratulatory chicken?